On Monday I decided to go out to lunch at the much anticipated Pei Wei.  The restaurant is located between Beards Jewelry and Charles Schwab near Chipotle and Bento (two great gluten-free restaurants) at the Town Center. 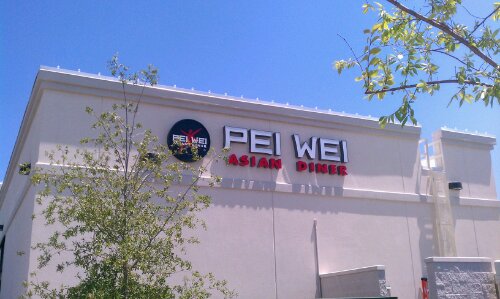 Pei Wei is owned by PF Changs and you order at a counter and then they bring your food out to you.  The prices are less expensive than PF Changs and the flavors and ambiance are very similar.

I asked the woman behind the counter for a gluten-free menu.  She handed me a small menu with 6  items on it. 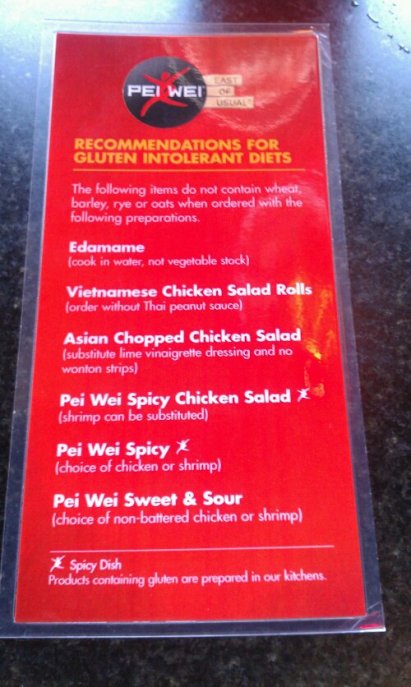 There is an electronic menu on the stand where you order with all of the items on the regular menu so you can see what things cost and what is in each dish.  There is no extra fee for ordering gluten-free (at PF Changs they charge about a $1 extra for all of their gluten-free menu options).  The woman behind the counter said they take extra precautions for people who order gluten-free.

I ordered the Vietnamese Chicken Salad Rolls and the Pei Wei Spicy with Chicken for my lunch .  Both items and a drink came out to $18.  That is not too bad, considering I had left overs for lunch the next day. 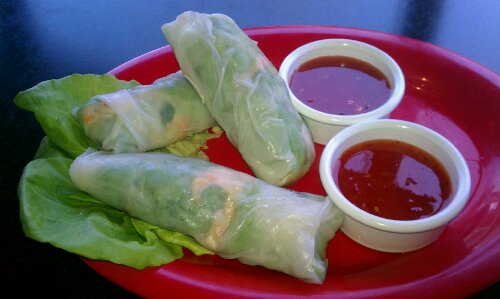 The Vietnamese chicken salad rolls were fresh and healthy tasting.  They were yummy, however they came out super fast and had some sort of peanut sauce on them and the menu said to get them without the peanut sauce.  I probably should have asked or verified that they were gluten-free but it was all over my receipt that it was gluten-free.  My advice if you order these is to double check that there is no peanut sauce on them.  I do not get sick right away so it is hard for me to know when I have been glutenated.  However what I ate of it was really tasty.  These are cold and not fried and they are a nice alternative to fried egg rolls. 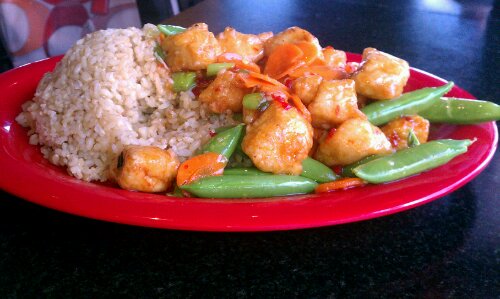 My main entree was the Pei Wei Spicy with chicken and brown rice.  The outside of the chicken was slightly crispy.  According to Lauren Teague a follower on my Facebook page, the proteins are dredged in potato flour.  Overall the dish was quite yummy, though I would have liked some different vegetables maybe peppers or broccoli rather than carrots and snowpeas.  Even though the name leads you to believe this is super spicy, it was not really spicy, I could easily have added a little more spice.  The flavoring was similar to sweet and sour chicken.

I really wish they had a gluten-free rice noodle dish.  The gluten-free menu seems a little limited.  I would also love to learn what procedures they take to make it safe for those of us with gluten-allergies.  It appeared that they used separate plates, but I am not sure about that.

I enjoyed my time at Pei Wei.  I haven’t had lunch by myself out at a restaurant in a while so it was nice to sit and look out the window and enjoy my meal.  You will definitely need a to go box. Portions are quite large for just one person.

Have you been?  What is your favorite thing to order?